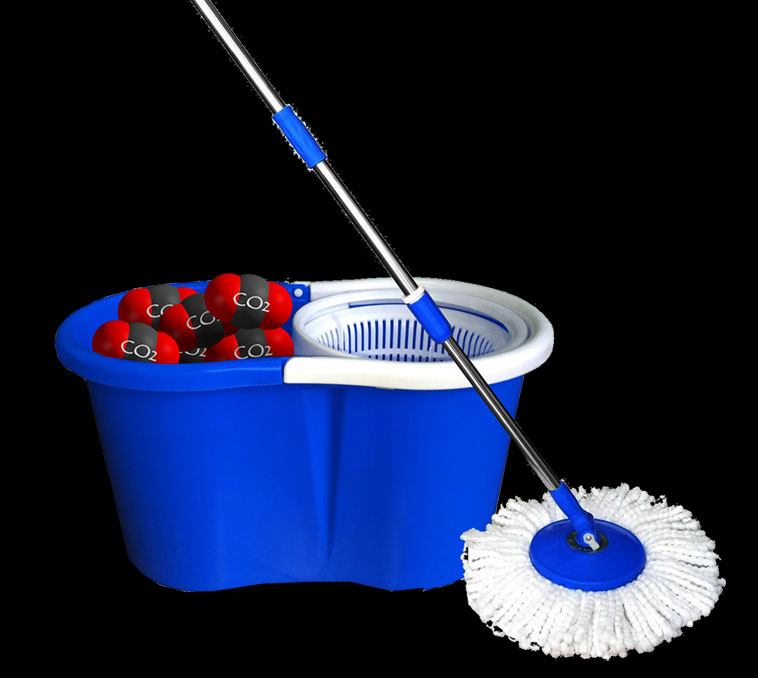 Energy transition and land use reform will eventually contain greenhouse gas pollution. Meanwhile, it’s time to clean up the mess.

While climate change impacts the biosphere with a growing fury, the practical challenge for the human race is not so much how to deal with the enormity of climate change itself but to remedy its root cause: the continuing accumulation of greenhouse gas pollution from industrial activity worldwide. We created the pollution; we had better un-create it.

There is progress on that front, but the relentless and intensifying symptoms of greenhouse gas pollution – a warming atmosphere, drought, extreme weather, melting glaciation and sea level rise – call for a new approach and more, shall we say, venturesome response.

As it stands, the transportation, electricity generation, heavy industry, and building sectors worldwide have begun to reduce carbon dioxide emissions by replacing fossil fuels as their source of mechanical and heat energy. The agriculture and forestry sectors have begun incremental moves toward land use reform – that is, reducing destructive human impact on the biosphere – to reduce emissions of nitrous oxide, methane and carbon dioxide. Steel and cement producers have begun to employ low carbon manufacturing processes, and manufacturers have begun the phase out of certain fluorine-based chemicals. For its part, the general public recognizes the importance of taking public transit, eating less meat, and making homes more energy efficient.

Nevertheless, climate action remains a nebulous and sometimes contentious affair where solutions seem too distant to address the immediacy of catastrophic drought, wildfires and flooding worldwide. Practical climate solutions are almost entirely dependent on structural changes in the competitive world economy and constrained by the appetite governments may or may not have to use policy instruments to expedite those changes. Most challenging, perhaps, is the fact that the electricity, transportation, industrial, building and land use sectors of the world economy must overcome some degree of path dependence: to bring down emissions, familiar ways of doing things must be put aside or dismantled at significant cost. Unfortunately, there is not enough time to let these otherwise normal transition processes work themselves out.

The prevailing climate narrative frames the way we consider climate action. The political version of that narrative, rooted in the UN Framework Convention on Climate Change of 1992, calls for reductions in greenhouse gas emissions, jurisdiction by jurisdiction, in a way that doesn’t involve undue economic hardship. This framework has been overtaken by events. An estimated 1.5 trillion tonnes of anthropogenic carbon dioxide have accumulated in the atmosphere since the industrial revolution, although some of it has, over time, been absorbed by the oceans, land surface and vegetation. The rate of the pollution has accelerated sharply in recent decades with an estimated 35 billion tonnes being emitted annually worldwide. The destructive effects can be stated in stark terms: greenhouse gas pollution is dangerously warming the planet. The solution is correspondingly stark. Eliminate greenhouse gas pollution and clean it up. All hands on deck.

Practically speaking, greenhouse gas elimination and cleanup have two distinct pathways. Eliminating the pollution has proven to be a complex international undertaking involving energy transition, ending the use of certain industrial chemicals containing fluorine, and land use reform. System change is required within those spheres of economic activity. Getting all the players to cooperate in the context of a competitive, bottom line-oriented world economy is a challenge in itself and proving itself to be endlessly time consuming. In contrast, cleaning up GHG pollution is relatively simple and straightforward. Remove carbon dioxide from the atmosphere and permanently store it. One technology, deployed globally, would conceivably do the job.

Cleaning up GHG pollution is defined by the Intergovernmental Panel on Climate Change (IPCC) as carbon dioxide removal (CDR). It is distinct from the removal of concentrated CO2 from the flue gas of an industrial plant – a form of pollution prevention. With CDR, carbon dioxide is removed directly from the atmosphere. This may occur in two ways: by direct air capture (DAC) technologies, and by the enhancement of natural carbon sinks such as soils and surface geology. In the process, CO2 is either sequestered or made available as a raw material for products.

Removing CO2 from the atmosphere targets gases that have been emitted worldwide since the industrial revolution. In an article published in Issues in Science and Technology in 2017, Dr. Klaus Lackner and Christophe Jospe elaborated on carbon dioxide removal while re-framing climate change as a waste management problem. “Carbon dioxide emissions represent the metabolic by-product of industrial activities on which billions of people depend to survive and thrive. Now we must learn to safely dispose of this by-product,” they write. Lackner and Jospe don’t regard CO2 removal as a panacea, however. “Direct air capture will not be a silver bullet that all by itself stops climate change, but it has many assets that can directly address some of the key obstacles to technical, political, and economic progress on climate change,” they continue. The scalability and relative simplicity of direct air capture, storage and utilization (DACSU) could ensure that “whatever goes into the atmosphere also comes out, no matter how difficult it is to reduce emissions from particular technologies or sectors, such as transportation. Direct air capture with carbon storage can also, if necessary, lower the carbon dioxide concentration in the atmosphere much faster than natural processes would.”

Klaus Lackner is the director of the Center for Negative Carbon Emissions at Arizona State University. Since 1995, he has been a pioneer in developing DAC. Jospe is Chief Development Officer at Nori, a Seattle-based company that is connecting CO2  suppliers with CO2 buyers.

Thinking of carbon dioxide as a raw material, either for sequestration or as an industrial material, is essential to bringing a variety of DACSU technologies to market. It would offset the high costs of deploying the critically important global cleanup operation. It might even be profitable.

A number of forward-looking organizations are beginning to make carbon dioxide removal a reality using enhanced natural processes and direct air capture. Some techniques find immediate use for captured CO2 in concrete, ultra strong carbon materials or synthetic fuels. Other developers are finding ways to permanently sequester the gas.

Silicon Kingdom Holdings, based in Dublin, Ireland, is planning to build mechanical tree farms using the capture technology developed by Dr. Lackner. Thousands of times more efficient than natural trees, mechanical trees use anion exchange membranes to remove CO2 from air flowing through them. Sodium carbonate solutions and heat further separate and purify the gas. The CO2 is then pressurized and made available for sequestration or for use in a variety of industrial applications such as synthetic fuels and high strength materials.

In Squamish, Canada, Carbon Engineering uses modular devices that blow air over a liquid capture solution. A closed loop series of chemical processes fixes the CO2 and then release it in concentrated form. Carbon Engineering plans to build full-scale modular plants that capture a million tonnes of CO2 annually. The CO2 will be permanently stored underground or combined with hydrogen to make synthetic transportation fuel.

Climeworks of Switzerland is operating a demonstration plant near Zurich that can remove 900 metric tonnes of CO2 from the atmosphere yearly. Similar to Carbon Engineering, fans blow CO2 through modular capture units roughly the size of shipping containers. Filters in the units capture the gas, then release it for collection when heated. A smaller demonstration plant in Troia, Italy, will collect 150 tonnes of CO2 per year. Again, similar to Carbon Engineering’s process, the CO2 is combined with hydrogen to produce synthetic fuel.

Climeworks also permanently sequesters carbon dioxide underground. In 2019, the organization introduced a public removal and sequestration scheme in partnership with Reykjavik Energy of Iceland. Through its subsidiary CarbFix, Reykjavik Energy injects CO2 from a 303 MW geothermal power plant into subsurface basalt rock. In less than two years, the injected CO2 mineralizes into solid carbonate rock. The Climeworks website invites individuals and organizations to pay a monthly subscription – in amounts up to €2,000 per month – to help fund the project. For example, €5 per month will sponsor the sequestration of 61 kilograms of CO2 yearly. Globally, the storage potential of basalt is immense. The rock composes about 10 percent of the earth’s continental surface area and underlies most of the planet’s ocean floor. Globally, the potential mineral uptake of basalt formations is estimated at between 100 and 250 trillion tons – in theory enough to absorb all the excess CO2 in the atmosphere a hundred times over.

In Halifax, Canada, CarbonCure injects recycled CO2 into cement during the mixing process. The carbon dioxide mineralizes into calcium carbonate and actually strengthens the concrete as it cures. The process permanently fixes CO2 at relatively low cost, and if scaled to the global concrete market, could sequester over 500 megatons of CO2 annually. CarbonCure presently derives most of its CO2 from industrial emitters such as ethanol, fertilizer, or other cement plants. In the future it expects to use CO2 from DAC technologies as they become available.

In San Francisco, USA, Charm Industrial has a patent pending for a process that produces bio-oil for storage deep underground. Fast pyrolysis converts the carbohydrate compounds in scrap wood, sawdust, and agricultural waste into a stable liquid similar to crude oil. In effect, the company is reversing crude oil extraction and returning carbon to its geological source.

Also in San Francisco, Project Vesta, a non-profit venture, captures CO2 by accelerating the natural weathering of rock. Small grains of olivine, an abundant green volcanic mineral, are spread like sand on shallow beach environments. Wave action abrades the olivine, increasing its surface area. In the process, the mineral reacts to atmospheric CO2 and ocean water – the same silicate-to-carbonate chemical reaction as natural weathering. The olivine becomes limestone which collects on the seafloor. Research suggest that applying olivine on just 2 percent of the world’s shallow ocean shelves would remove one year’s worth of annual global CO2 emissions at low cost. A pilot project is underway on a Caribbean beach, but more testing is required to answer questions about safety and viability.

In Calgary, Canada, a team of researchers led by Dr. Stuart Licht of George Washington University is running a demonstration project that uses electrolysis to capture CO2 from flue gas to produce carbon nanotubes (C2CNT). The CO2 is split into pure oxygen and pure carbon fibres. The fibres can take different forms for different applications. Graphene would be suitable for safe, stable sequestration. Carbon nanotubes, a hi-tech industrial material, are now used to make aircraft bodies, tennis rackets and other strong lightweight products. The highest quality nanotubes can fetch up to $100,000 per kilogram. Direct air capture versions of the process would be self-powered using solar thermal and photovoltaic energy. According to Licht’s calculations, full scale deployment in an area less than 10 percent the size of the Sahara Desert could reduce atmospheric CO2 concentrations to preindustrial levels in 10 years.

At present, capturing, using and sequestering carbon dioxide by any means is expensive, costing up to $600 per tonne and more. As with any new technology, however, economies of scale could put the cost below $100 per tonne.

Normally, fishing around for a silver bullet to stop climate change in the labyrinth of the world’s energy systems (and their governing bodies) would be a fool’s errand. Nevertheless, the global application of carbon dioxide removal is indeed be a single, potentially decisive pathway to ending the effects of greenhouse gas pollution. As we fret about the deepening climate crisis, it helps to remember that the crisis is, practically speaking, a greenhouse gas pollution crisis, or perhaps less dramatically a waste management challenge. It is both reasonable and scientific to expect the spectre of climate change to vanish when we remove all anthropogenic carbon dioxide from the atmosphere. It can be done.