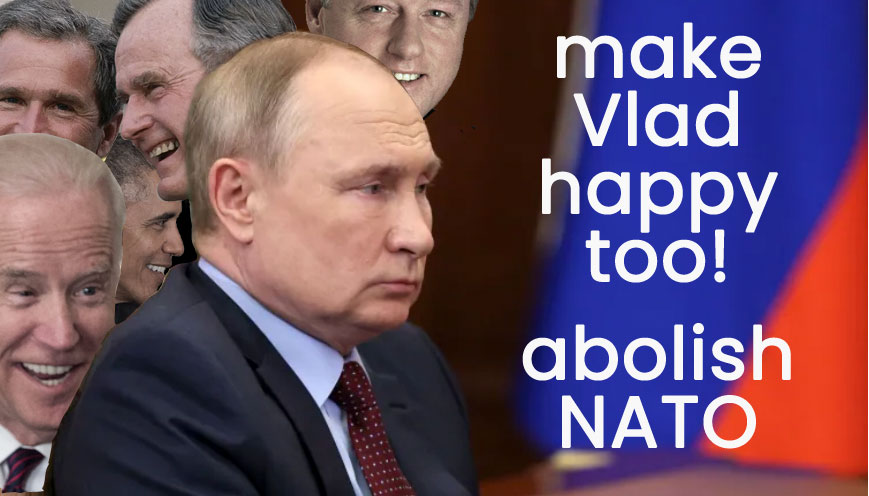 War may be a stupid capitulation to reptilian impulses (apologies to the reptiles), but once it breaks out, superior brutality, craftiness and arrogance will win the day. In contrast, peaceful coexistence requires true diligence and a humble willingness to examine circumstances that can lead to conflict.

Which is the more exciting narrative, eh? And what about the Russo-Ukraine war?

A prevailing narrative in the West holds that Vladimir Putin is a vile and ruthless Russian expansionist intent on subjugating Ukraine to fulfill historic territorial dreams. Arguably, this view is a contemporary version of Cold War anti-communism. It is simple, easy to understand, and identifies a bad guy.

An alternate narrative holds that the US-dominated North Atlantic Treaty Organization (NATO) is an expansionist military alliance that has heedlessly exacerbated cultural and security conflicts that arose between Ukraine and Russia after the breakup of the Soviet Union in 1991. When the Cold War ended, NATO’s original purpose ended with it, but the alliance carried on, going so far as to claim a new purpose. In the aftermath of 9/11, it saw itself as a deterrent to rogue entities in the Middle East. Really.

Ukraine’s relationship with NATO began soon after the Soviet Union collapsed in 1991. In that same year, Ukraine joined the NATO-sponsored North Atlantic Cooperation Council and, in 1994, joined NATO’s Partnership for Peace program. At a NATO summit in 2008, and over strong objections from Russia, US delegates voiced their ongoing interest in having Ukraine join the alliance, albeit once certain conditions of membership were met. The Ukrainian government continued its efforts to meet those conditions, but dropped the idea after a Russia-friendly government, led by Viktor Yanukovych, was elected in 2010. Yanukovych’s new government was opting for strategic neutrality.

In late 2013, Ukrainian President Yanukovych decided not to pursue plans for closer economic ties with Europe, opting instead for an economic deal offered by Vladimir Putin. This sparked months of demonstrations in Kyiv, centered around Maidan Square. The demonstrators had various ideological agendas, but ultra-nationalist, neo-Nazi factions are thought to have turned things violent. In February 2014, the demonstrations culminated in the Revolution of Dignity and the overthrow of Ukraine’s government. Yanukovych fled to Russia.

The legitimacy and results of the referendum were disputed, but that didn’t stop Russia from taking administrative control of the region. That too was disputed. While Russia was welcoming Crimea’s return to the motherland, all but a dozen or so UN member states viewed Russia’s takeover as an illegal annexation. It is important to note that Crimea was under administrative control of the Russian SFSR until 1954, when the USSR’s Supreme Soviet handed the region over to the Ukraine SSR, in what was then considered a largely symbolic gesture by Nikita Khrushchev.

Meanwhile, in April 2014, Russian speaking radicals took over numerous government security offices in the Donbas region of eastern Ukraine. They later announced referenda to decide whether to stay with Kyiv, declare independence, or join Russia. The new Ukrainian government viewed the Donbas radicals as terrorists and sent in the armed forces. The insurgents accepted covert military aid from Russia. In the simmering civil war that followed and continues to the present, thousands in the Donbas region died.

In late 2014, Russia’s takeover of Crimea and its unofficial military activity in Donbas spurred the Ukrainian government to prioritize integration with the European Union, membership in NATO, and the taking back of Crimea. In 2019, Ukraine amended its constitution to make joining NATO a strategic foreign and security policy objective.

Remembering repeated invasions from Western Europe over several centuries, and cognizant of American regime change adventurism, Russia has always made it clear that Ukraine, a former republic in the Soviet Union and cradle of Russian culture, could not become part of a Western military alliance. Russia has never shied away from military force to back its political positions and its opposition to Ukraine’s ambition to join NATO is no exception. Some high-ranking officials in the US government have always known this, but US foreign policy, and NATO, have inched forward.

It is practically impossible for the average person to sort out the tangled web of political mistrust, overblown nationalism and knee-jerk militarism that led to the tragic and unexpected invasion of Ukraine on February 24, 2022. For diplomats, reconciling pro-American and anti-Russian narratives could not be more difficult. Sober thought is carried away by the blizzard of double standards blowing full force through government chambers around the world. Shock and awe in Bagdad. Military operations in Ukraine. Try to figure it out.

Like solving the climate crisis and dealing effectively with COVID-19, a peaceful solution to the Russo-Ukraine war (and everywhere else for that matter) demands an intelligence that’s in short supply. But one thing is clear: NATO is a Cold War anachronism and its mere existence can only do one thing: usher back the stupidity and waste of a bygone era.